Moving Image Study of Smeerenburg Glacier Calving was filmed on the Norwegian archipelago of Svalbard in June 2017. In the autoethnographic field notes taken on location, the artist Adam Laity writes: “Within this moment I experience a realization that I am so closely connected to the glacier as to be almost one and the same thing. I am keenly aware of my being in the world and inter-being with the landscape I am looking at, with the environment I am standing in.” This connection is precisely the feeling the artist wants to convey through the images captured by his camera and through which he also invites the viewer to look at the landscape with what he calls an eco-sublime point of view.

The eco-sublime landscape is the key concept in Adam Laity’s works. It represents the evolution of the classical “landscape” and the Romantic “sublime” in a contemporary Anthropocene frame. The landscape generally refers to a portion of the natural world embraced by the eye of the viewer in whose spirit it inspires deep emotions. It was during the Romantic movement that the natural landscape gained a place of honor as the main source of what was then considered the most peculiar of human feelings, the sublime. This term encompasses the double, as well as simultaneous, emotional reaction of the viewer, who faces the immensity of nature: on the one hand there is a sense of helplessness and extreme inferiority in front of something so powerful and out of control; on the other, this shock brings the viewer to the realization of their own inner greatness, namely, being the only living creature able to admire, feel, and contemplate such a powerful immensity.

Laity links the notion of the sublime to the new geologic era we live in—the Anthropocene, also known as “The Age of Humans.” An age characterized by the unmistakable impact that our species is having on the planet, permanently altering the atmosphere and the landscape, while endangering other animal and vegetables species. What is special about this shift in the Earth’s history is that we, humans, are the only species willingly driving this change, which will lead us to our own extinction. Laity presents us with a view of the accelerated deterioration of polar glaciers—a  “landscape of ecological catastrophe.”

Laity comments on his subjective experience of filming the calving scene in parts: his physical arrival at the location and the inarticulable feeling that seeing the glacier calve evoked. His physical arrival encapsulated the moments of preparation, of waiting for the precise moment of calving to occur, the adrenaline that flooded him at the instant the enormous glacier collapsed, and the final moments of calm after the waves and noise generated by the glacier dissipated. To Laity, this moment evoked a mixture of emotions: the fearful reality that other species and the children of his children will pay the price for humans’ actions, and a moment of peaceful surrender to his world.

The sound of trickling water precedes the first shot, which shows an Arctic landscape from eye level. The viewer’s intimate vantage point is intensified by the close-up views of the enormous glaciers. Varying levels of transparent ice create multiple shades of turquoise, white, and blues. The full immersion of the viewer in this apparently unspoiled environment suddenly breaks as the Antigua ship appears on the screen, revealing the presence of people in the natural landscape. This minimal human presence is what makes the landscape sublime: it is an emotion which can only arise from the confrontation between humans and nature. The appearance of the ship in relationship to the glacier provides not only the evocation of the sublime, but also provides scale. The glacier, roughly the height of a seven-story building, dwarfs the sailboat.

About a third of the way through the film, the camera pauses in front of the Smeerenburg Glacier. Before it begins calving, thunderous sounds dominate the background music. An excerpt from Laity’s field notes describes his feeling immediately before and during the calving:

I sense the ice moving before I hear it or see it fall—there is a trembling in me that I have experienced only a handful of times in my life. I feel the movement in the water through my feet standing amidships as the ice produces waves. I am overcome, as the ice face shears and cracks, by new shades of blue that I have never seen before.

The clip of the glacier calving is paralyzing, because it shows this natural phenomenon in all its majestic strength. In a matter of several chaotic seconds, fragments of ice the size of large buildings collapse into the water, generating waves as high as the ice wall itself. This scene is certainly the most dramatic of the whole sequence, and it represents what the artist would define an “eco-sublime landscape moment,” in front of which humans cannot help feeling fear, awe, and wonder.

In the wake of the calving scene comes a bird’s-eye view of a seemingly endless Arctic terrain. The contrast between the white sky, glaciers, and the dark Arctic Ocean in the following scenes are striking. Images of half-melted icebergs litter the sea, glowing a beautiful green color. The dominant white of the aerial footage contrasts with the different palette of the close-ups of the ice blocks floating around. The ice no longer looks solid, unbreakable; it is disappearing in the transparency of the water: what once was an immense island of ice and snow has now disappeared. Everything is still, silent, except for the subtle cracking of ice. There is the looming sense that it will happen again.

The last images lead the viewer to the bitter end of this journey. On the screen there is a lonely and highly irregular piece of ice floating in the middle of the water. It resembles a piece of modern art, a sculpture, the ultimate emblem of this disturbing process of destruction that is unfolding before our eyes.

Laity describes his responsibility as a contemporary artist as instilling a hope in his audience that is practical and reasonable. This means accepting what is happening, yet remaining hopeful by being present and attempting to make a positive difference in the lives of all creatures inhabiting the earth. By moving towards, through, and beyond an eco-sublime landscape moment, the viewer is fully able to grasp the inner essence of the surrounding nature, not only visually, but also emotionally, in an effort, as Laity says, “to imagine how nature might see itself ” and we might add, how nature might feel.

Adam D. J. Laity is originally from the city of Truro in Cornwall, England. He attended Dartington University where he studied philosophy as an undergraduate and later earned his master’s degree in cinematography and film in 2012 from Bournemouth University. He is currently completing his  doctoral degree at the Centre for Movie Image Research at the University of the West of England in Bristol. His research focuses on the relationship between nature and the subject—more specifically on the intellectual, artistic, and emotional value of the natural landscape linked to the philosophical concept of sublime. He considers himself a Romantic scholar, focusing on a recontextualization of traditional concepts of the sublime landscape, framed in the contemporary anthropocentric perspective—what he calls the “eco-sublime landscape.”

In June 2017 Laity took part in an expedition around the Norwegian archipelago of Svalbard together with 30 international scientists and artists. It was part of an annual expeditionary residency program named The Arctic Circle, which organizes two expeditions every year: the Summer Solstice Expedition and the Autumn Art & Science Expedition. During a three-week period, international artists, scientists, and innovators live and work aboard the Barquentine Tall Ship Antigua, while sailing the waters of the international territory of Svalbard, a high-Arctic archipelago. It was during this residency that he filmed Moving Image Study of Smeerenburg Glacier Calving. 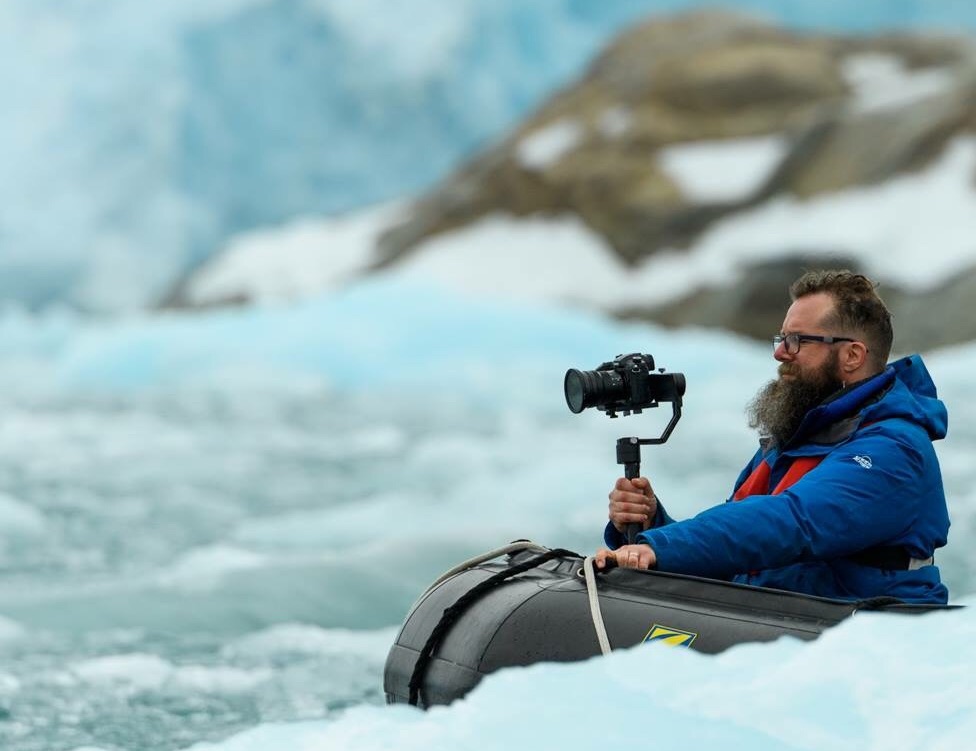