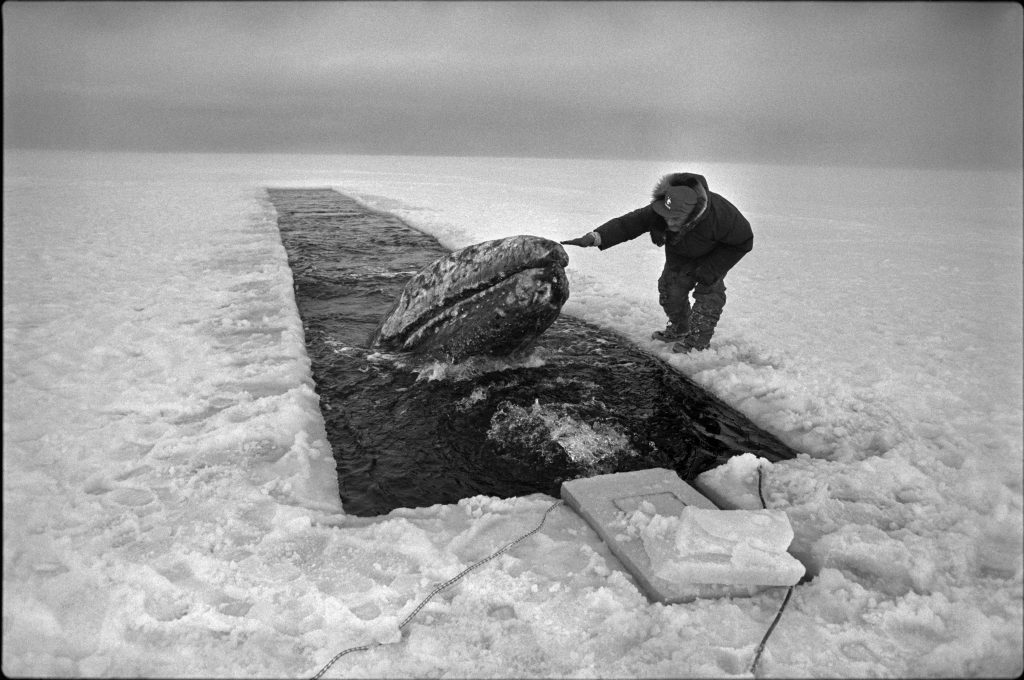 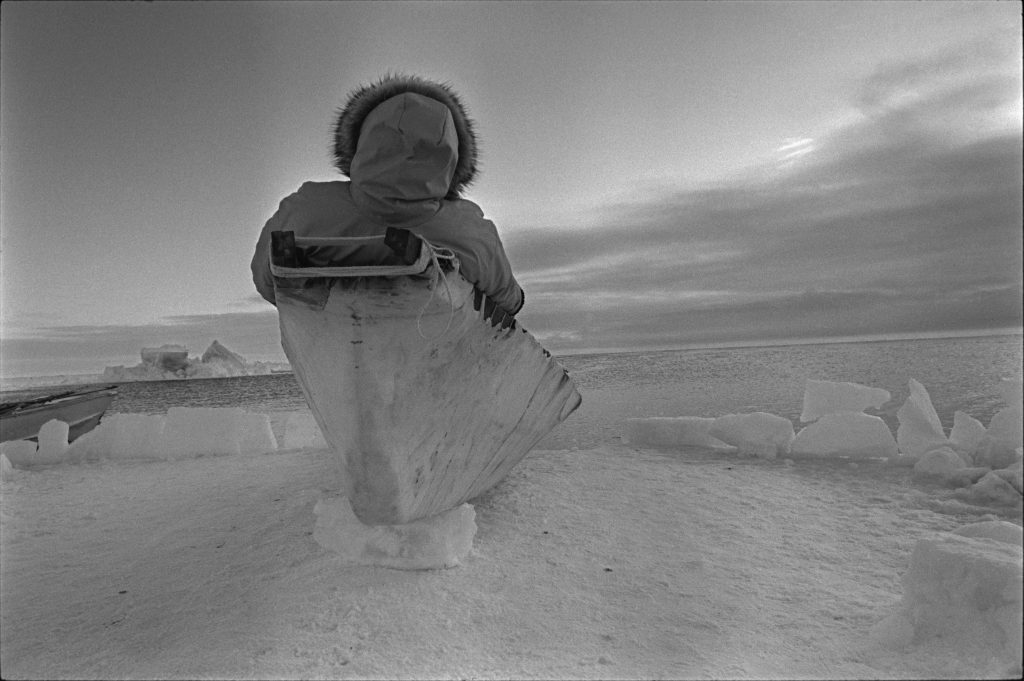 Perhaps the greatest accomplishment of documentary photography is to bring the Arctic and the radical changes that it is currently undergoing to the attention of those of us living far away. Many of the artists featured in this exhibition examine those massive changes on a geographical and environmental level—recording physical transformations in the landscape. Bill Hess, on the other hand, looks at the personal struggle of the people who live and work in the Arctic. His photography documents the Inupiaq people and their remarkable efforts to preserve their traditions in the face of extreme environmental and cultural adversity. In the vein of George Catlin and Edward Curtis, Hess focuses on the lives of indigenous peoples as their way of life vanishes. His photographs range from everyday scenes of children in school and families at home to more complex and challenging works, such as his famous series of the Inupiaq tribe hunting whales.

The complex relationship between the Inupiaq and whales is addressed in Hess’s documentation of Operation Breakthrough, an international attempt to save three gray whales trapped in pack ice—a mixture of ice fragments of varying sizes that cover the sea surface with little or no open water. The effort was spearheaded by the Inupiaq, many of whom were whale hunters themselves. In the photograph Malik Says Goodbye, legendary harpooner Ralph Ahkivgak, better known as Malik, is seen reassuring Crossbeak (the largest of the gray whales). The photograph records Malik’s hand extended to Crossbeak’s head. A faint white halo surrounds Malik’s hunched figure, highlighting him and emphasizing his compact size compared with the massive snout of a 30-foot whale. In this image, man is juxtaposed to the immensity of the land, the gray whale, and the pool he created in the ice to allow the trapped whale to breathe. Just as Malik reaches out in compassionate farewell, the whale Crossbeak seems to desire the contact, to long for the reassurance of another living being in the vastness of the Arctic. As the eye moves forward from the white flatness of the land, indentations in the snow emerge, the result of the deep boot prints surrounding the breathing pool. They are from the month-long efforts of the Inupiaq people who cut four miles of breathing holes for the whales using nothing more than donated chainsaws and push poles.

Photographed in black and white in 1985,George Ahmaogak Waiting for a Bow-Headed Whaleshows George Ahmaogak, a prominent whaler, sitting in his boat, waiting for a whale. The sun is hidden behind clouds, which create a strong diagonal across the photograph, intersecting with his figure. His body and the boat create a shadow which leads the eye out to sea. As the light reflects on the sea and the glacier, the reflections highlight the loneliness of the landscape and the patience required of the hunter. The boat is balanced precariously on the edge of the glacier, ready to plunge into the ocean at the first sight of a whale. The sharp contrast between the peaceful figure of Ahmaogak and the potential for immediate movement underscores the desperation felt by the Inupiaq community when whales are scarce. When Hess writes about the stress of waiting for the whale, he often repeats the Inupiaq saying that “the whale comes to you.”  Hess notes that he spent three years with the Inupiaq people before he even saw a whale! These images serve as an intimate and poignant record of the great mystery that remains in the Arctic— seen only by those who inhabit it.

Perhaps that explains the power of these images. They give the Inupiaq people a voice in a world that often views them either as a curiosity or as secondary to their homeland. Hess’s photographs document changes in Inupiaq life while simultaneously creating a record of their traditional practices; and this record may help preserve these traditions for future generations. The Arctic is not merely a barren icy plain or distant melting glaciers; it is a home for animals and humans alike—and has been for millennia.

For Bill Hess (b.1950, Utah) coming to the Arctic was like coming home. After 30 years of living with the Inupiaq, Hess reflected, “Even before I could read the word ‘Alaska,’ I felt Alaska call out to me.” Hess served for two years as a Mormon missionary on Native American reservations in South Dakota and Montana, where he met his wife, Marjorie Roosevelt, a White Mountain Apache who was also on a Mormon mission. During this period, Hess was interested not only in the people he was living with, whose way of life was vanishing, but also in the buffalo that have vanished from American plains. Now living in the Arctic, he sees the whale as comparable to the buffalo, in that both are key to the sustainability of the way of life of indigenous peoples. This inspired his series documenting the relationship between whales and the Inupiaq community (I Came Home).

Hess and his family moved to Wasilla, Alaska, in 1981. For four years, he wrote for The Tundra Times, a small local newspaper that served the diverse community of Alaskan Native Americans. In 1986, Hess bought an airplane for $15,900, and scrounging for gas, he flew all over the state recording the changes he saw in Native American communities and their way of life (With Whale Hunt Photos). His 1999 book, Gift of the Whale: The Inupiaq Bowhead Hunt, A Sacred Tradition, documents the relationship between the Inupiaq tribe and the whale. Today, Bill Hess is active on Instagram. He has also documented his experiences in personal blogs. He works as a freelancer for publications such as National Geographic, Uiniq Magazine, and Alaska Village Voices. 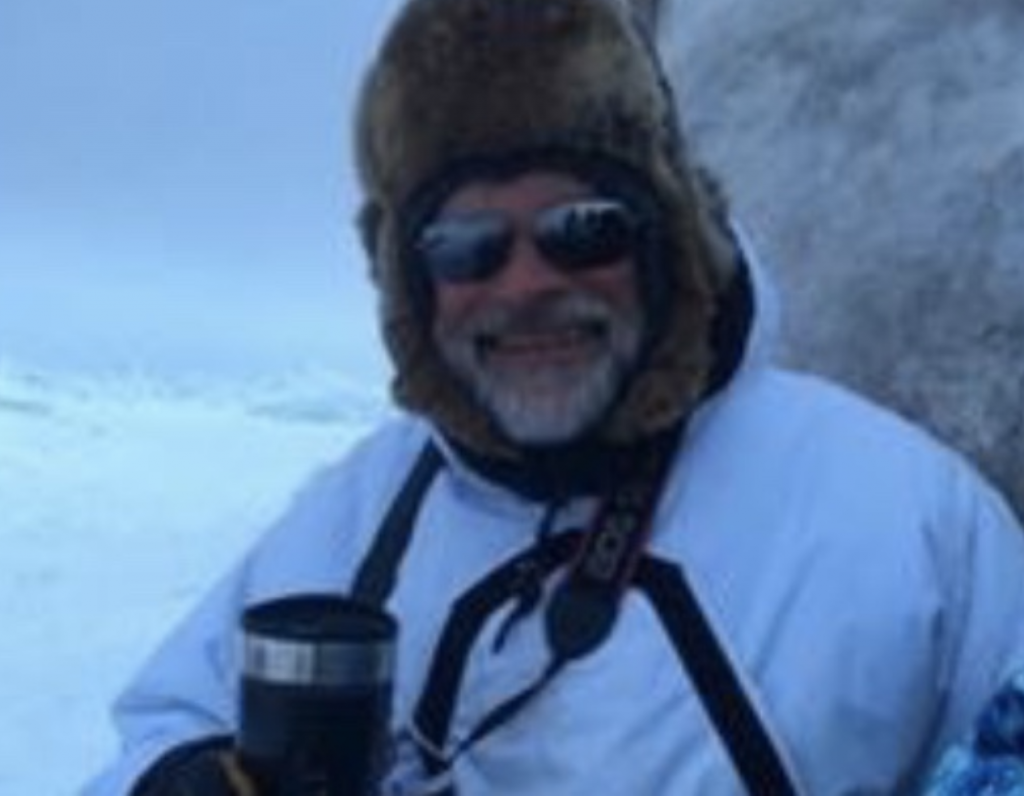