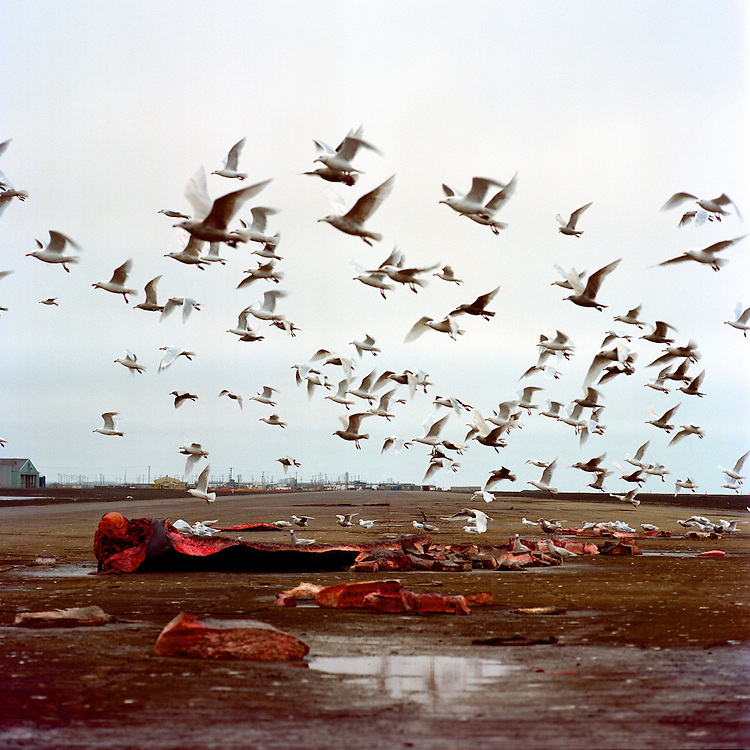 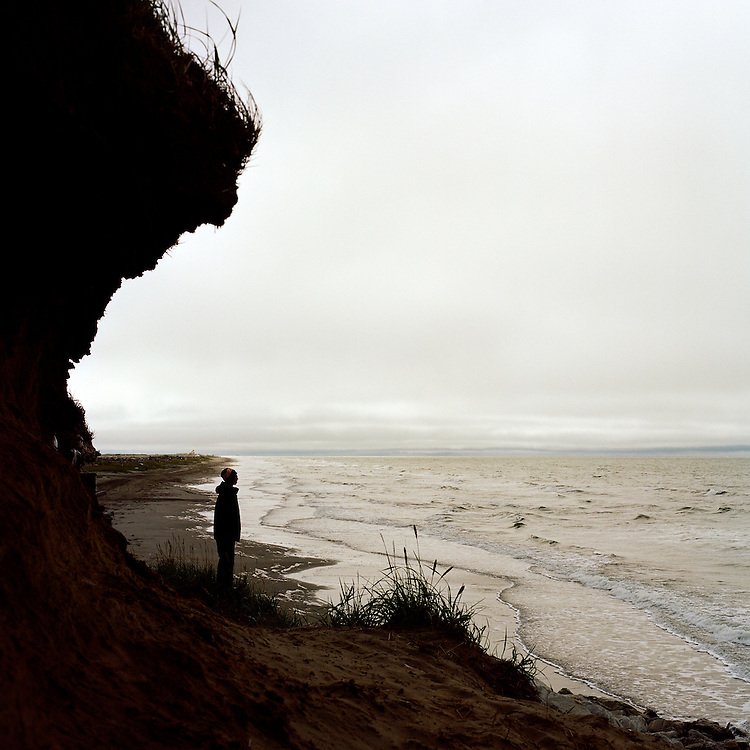 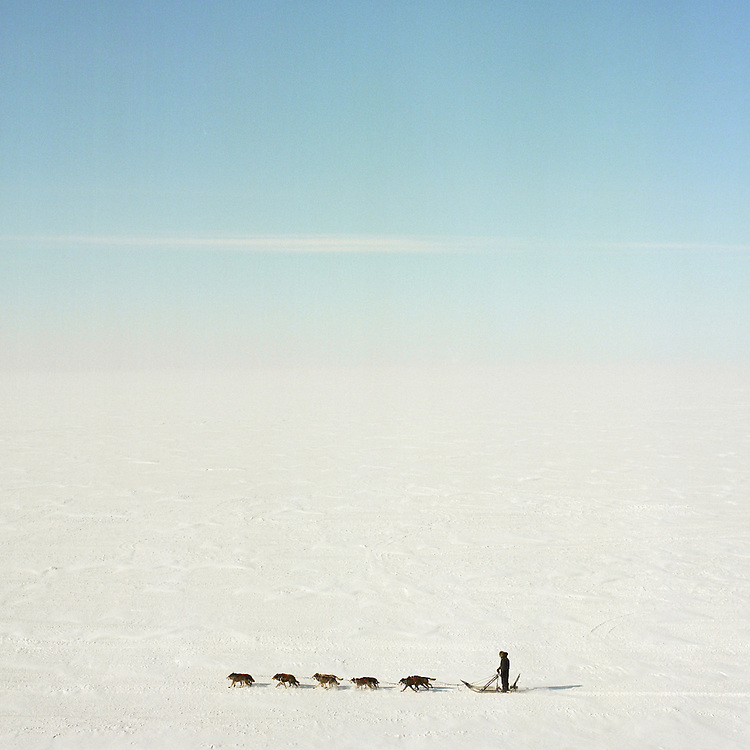 I am Inuit tries to avoid the anthropological approach towards different cultures with their fascinating, exotic traditions. Instead, it aims to enlighten the viewer about the struggles of ordinary people living in the Arctic in the 21st century; it records their narratives, their everyday life—and it shows their resilience. The photographs also underline the inseparable link that connects the land to its people.

Many of Adams’s photographs document coastal corrosion and the diminishing natural resources that are threatening the subsistence harvest practices of the Iñupiaq. In our online exhibition, we present three photographs. They are pictures of landscapes and human beings. The humans are small, but they are there, and they are an important part of that landscape. They remain there like a natural and obvious part of the scenery, but the image provokes a sense of nostalgia.

A dog team on the frozen Kotzebue Sound is photographed from the observation deck of the Nullaġvik Hotel in Kotzebue, Alaska. The Hotel is the most important hotel in the city and provides a stunning view of the landscape. The photograph is of a lone man with a team of sled dogs, dwarfed by the landscape. It was taken in one of the biggest cities in Alaska, about 30 miles above the Arctic Circle. (It is common to travel the surrounding lands with sled dogs.)

Another photograph was taken in Utqiagvik, where the indigenous population lives off subsistence hunting and fishing—seals, geese, ptarmigan, moose, and caribou, fish and whales. The image is of the remains of a bowhead whale eaten by seagulls. The lives of the people are regulated by the seasons and weather conditions and animal migration; they find a certain harmony with nature and with the animals surrounding them. But the coastal erosion and the lack of fish is a situation threatening not only humans inhabiting these areas, but animals as well.

The photograph of Shishmaref, Alaska, documents a village that has lost over 3,000 feet of land in less than 30 years because of coastal erosion and ice melting. The people have had to relocate their houses to other parts of the island, and they have been warned that the island will disappear altogether in two decades, eventually forcing them to leave their homes. Many of the elders are resistant to leaving; all their history, culture, and traditions will disappear with the island, submerging the home of a people who have been living there for 500 years. The photograph is accompanied by the testimony of a young member of the community, describing his awareness and concern—a powerful statement considering how young he is and how he will soon see his home disappear forever:

I will be 18 tomorrow, and every year I see the land slowly decreasing. Many people call it climate change; others call it big bologna. In real life, if they actually came up here and lived with us for a few years, they would see what we are talking about and what we are going through, year by year. It’s a big change for us. I am not even that old you know? Things have changed in a short amount of time. — Lynden Weyiouanna is Inupiaq and lives in Shishmaref, Alaska.

by Jessica Ruffini, Università degli Studi G. D’Annunzio Chieti-Pescara
Brian Adams (b. Anchorage, Alaska, 1986) is an Iñupiaq photographer who specializes in environmental and portrait photography. His mission in his work is to dismantle stereotypes and counter the common image that many people have of the Arctic and its people—a faraway place with people in strange clothes living in igloos. He also aspires to raise awareness of climate change and the destruction it is causing to his home.

Adams says that he first felt his attachment to his Iñupiaq roots when he went to Kivalina for his grandmother’s funeral. There amongst the elders all that was passing was brought home to him. From that moment, he decided that taking photos of his own people and telling their stories was what he wanted to do for the rest of his life. In the process he also analyses his own twofold identity as American and Iñupiat; his work is about who he is and what it means to be Alaskan.
Adams traveled first to Quinhagak and then long distances to other communities, facing great difficulties and harsh conditions. The places he visited include Quinhagak, Teller, Shugniak, Utqiagvik, Point Hope, Wainwright, Anaktuvuk Pass, Kaktovik, Kotzebue, Buckland, Noorvik, Noatak, Nome, Shishmaref, Shaktoolik, White Mountain, Bethel, Hooper Bay, Alakanuk, Tuluksak, and Anchorage. His collection of photographs I am Inuit was published in 2015 with the support of the Inuit Circumpolar Council- Alaska (ICC-Alaska), a non-profit organization that works on behalf of the Iñupiaq.
The ICC-Alaska decided to support this project because they wanted to connect the Arctic with the rest of the world. At a time in which climate change is something “obscure” and “indefinite” to many people—especially Americans in the lower States— there is an urgent need to provide a better understanding of people who everyday try to survive and fight the enormous and terrible reality of climate change. 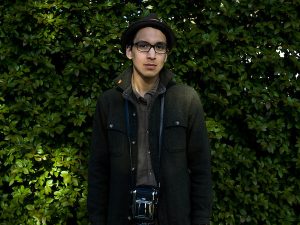