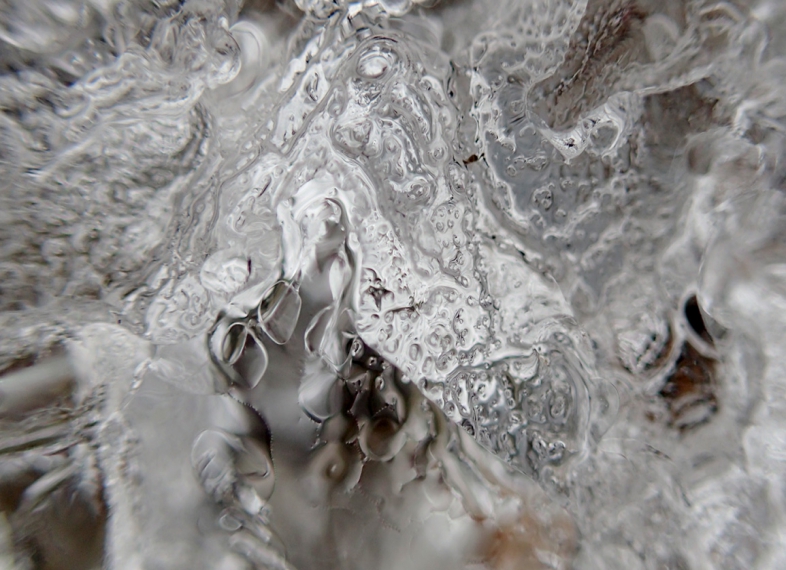 Glacial Cosmologies is the product of Carleen Sheehan’s participation in the Arctic Circle Residency, which she spent on a ship off the coast of Svalbard, Norway, in the High Arctic in June 2017. The residency is a program that enables scholars, scientists, and artists from a wide range of disciplines to experience the Arctic and the changes to its climate. Artists Janet Biggs, Adam Laity, and Jessica Segall, who are also represented in Art for Arctic’s Sake, participated in the same residency, although at different times. The close collaborative environment allowed for the sharing of information and approaches to create a communal voice addressing the situation in the Arctic as it devolves.

Ideas of shifting scale run throughout Sheehan’s work. She described her experience in the vast Arctic landscape as being disorienting, as moving through a space so seemingly endless that one loses all sense of scale. She explains that our understanding of our place in the world can shift in such a landscape. Since the Arctic is such a vast place, her proposal for the residency was to photograph the Arctic from an intimate, macro perspective, examining the space beneath her feet, within arm’s reach.

Her time in the Arctic coincided with the summer solstice, when there is sunlight 24 hours a day, and small plant life manages to thrive. She experimented taking close-up photographs of ice, lichen, flowers, dwarf birch and willow trees, and oozing mud using a macro lens. Ultimately, she found that surface scans of recently calved glacial ice were some of the most provocative images. Ideas of micro and macro have always been an integral part of her work and mesh seamlessly with the environment of the Arctic and the issue of climate change. Sheehan found the Arctic to be an expansive space in which a focus on the smaller elements that comprise it would create an impactful body of work.

This body of work consists of micro-scanned images of glacial ice that washed up on the coast after breaking off a glacial face during a process called calving, in which chunks of ice break off at the terminus, or end, of a glacier, forming an iceberg. The scans were made of glacial ice while it was in the process of melting. According to Sheehan, accelerated melting is “making ghosts of the intricate universes, the atmospheres and collective histories that had been embedded within [the ice].” In these pieces, she is recording something at the moment of its disappearance, creating a metaphorical reversal of the process of melting. Sheehan captures what is lost as ice melts. The images are a memorial to what is physically lost, as well as to the loss of historical data stored within. Often overlooked is the fact that these last bits of glacial ice contain entrapped air and gases, such as methane, that may be thousands of years old.

As previously noted, Sheehan used a waterproof camera with a macro lens to shoot this series. The flat shape of the camera allowed her to scan chunks of calved ice by sliding the camera incrementally along their surface, revealing ice formations called Tyndall Formations, after the 19th-century scientist who first noted the intricate forms that occur primarily in melting glacial ice. Tyndall was one of the earliest scientists to note the relationship between carbon output and a warming climate. The macro lens allowed for the production of highly detailed, close-up images, documenting the ice before its inevitable disappearance.

These glaciers serve as a sort of repository of both history and memory, and Sheehan’s work records this in a way that is specific to individual glaciers. The titles of these works, which are all names of places and glaciers, contribute to the specificity of the loss. This grants them an individuality, instead of relegating them to the abstract. This attention to individual glaciers reinforces their importance, as well as the significance of the loss that comes with their disappearance. This is not just the loss of any ice, but ice from a specific glacier in a specific location.

These works employ light, shadow, texture, and abstraction to focus clearly on the details of the ice itself. The cool-toned, black-and-white photographs reflect the cool, subtle gradations of color of Arctic stone and ice. Sheehan chose to print the images on a silver paper because of its reflective, iridescent quality, which mimics that of ice. As the quality of light changes with the time of day, the images respond and reflect a changing color field. The shadows of viewers also appear and disappear on the surface, placing the viewer within the space of the image. The nuanced combination of documentation and abstraction employed to create this “site-specific narrative about the disappearance of ice” effectively makes the broad issue of climate change specific and intimate.

Carleen Sheehan (b. 1962, New York, NY) is a professor, curator, and Artist in Residence in Fordham University’s Department of Theatre and Visual Arts. In her work, she incorporates a variety of media—drawing, painting, and photography—to convey what she terms, “the collaged, compressed experience of contemporary life.” She describes the primary focus of her work as “the experience of contemporary space, with its accelerated temporal shifts and collaged eccentricities.” Weather and climate play a continuous role in her art. As she puts it, “Weather, as atmosphere, form, and effect, weaves through the images, while imposed structures support and organize space.” Her earlier work with photography influenced her decision to incorporate photographic processes into these images of calved glacial ice in the Arctic. 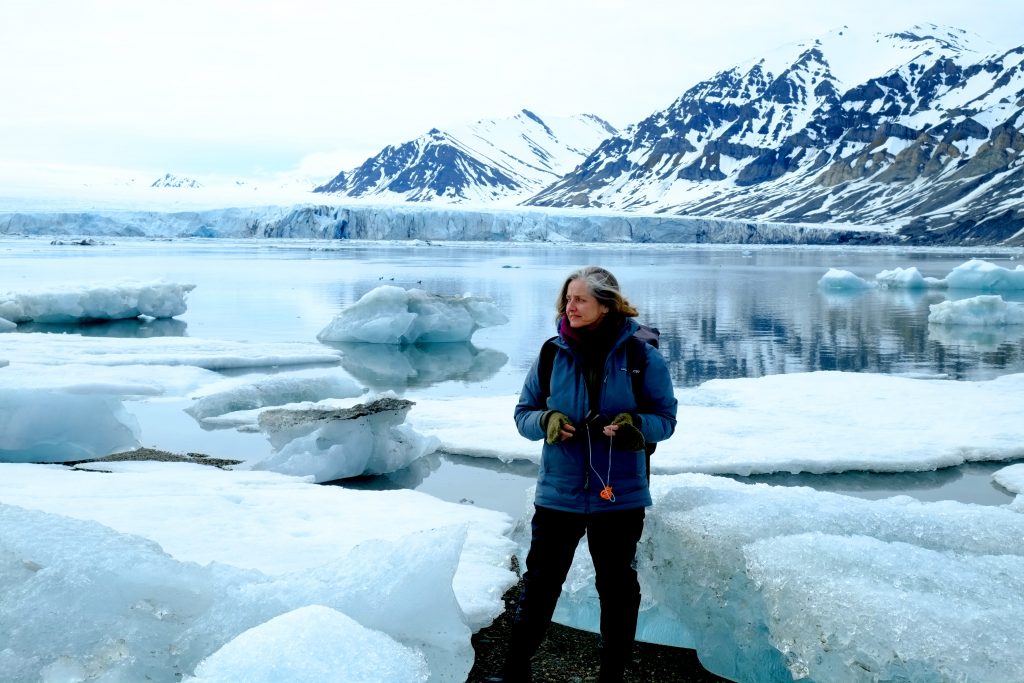