Byrne’s Cold Rush (2017) is an eleven minutes long video that researches the subject of Arctic sovereignty, a territorial dispute involving Russia, Canada, Denmark, Norway and the United States. It was originally commissioned for The Hugh Lane Gallery of Art (Dublin) as part of The Ocean After Nature group show in 2017. The video was partly shot at the abandoned RCMP post at Dundas Harbour and at Grise Fiord, Ellesmere Island in the high Arctic in August 2017, and combined film footage from the US army archives and Russian news as well as other sources.

Cold Rush references one of the greatest races for control of a vast fortune. The Arctic is believed to contain as much as one-quarter of Earth’s undiscovered oil and gas and, unlike the Antarctic, which belongs to no one and is governed by international treaty, the Arctic is up for grabs, and the eight countries that ring the region — Russia, Finland, Sweden, Norway, Iceland, Denmark, Canada, and the United States — have grown increasingly assertive, holding military exercises, reopening nearby Cold War-era bases and building new ones. Now, these countries are jockeying for control over this cold region.

From the emergence of the Northwest Passage, that was once supposed mythological, to Russia’s planting of a flag on the seabed 4,261m below the ice, Byrne meditates on the battle for one of the most strategic, yet inhospitable places on Earth. And it is indeed a battle. In 2007 Russia planted its flag on the seabed of the North Pole, a symbolic gesture of staking a claim on the billions of dollars’ worth of as-yet-unextracted fossil fuels in the region.  According to Byrne this gesture served as the starting point for the entire work and its theme. It is quite shocking to see such an archaic tactics still being employed in the twentieth first century to secure sovereignty.

As the Canadian foreign minister at the time said, “This isn’t the 15th century. You can’t go around the world and just plant flags and say: ‘We’re claiming this territory.’” Canada has also engaged in trying to  securing sovereignty in the Arctic for some time – by settling Inuit communities in remote parts of its territory. It was this phenomenon in particular that Byrne wanted to investigate in her film.

She went to Grise Fjord, which is the most northerly inhabited region of Canada, and one of the coldest in the world – it’s called the place that never thaws. A community of Inuits was settled there in 1953 by the Canadian government. They were told they were only going for two years and that they’d be brought back. But they’re still there. When Elaine Byrne spoke to the residents of Grise Fjord, she found there’s a lot of anger and bitterness amongst them; they feel sidelined and ill-treated by the Canadian government, despite the multi-million-dollar settlement they received. This community is an example of the collateral damage of the cold rush.

Russia, Canada, and Denmark are currently all asserting their right to land in the Arctic – they have submitted papers to the UN, which are shrouded in secrecy and difficult to get hold of, as Byrne has discovered. The race is on as the impact of global warming melts the ice in the Northwest Passage, making it more easily navigable year-round. Byrne discovered that not only are these countries vying to assert their claim to unclaimed territory in the Arctic, they’re also arming the regions they do currently have access to. The film shows the participating countries presently building military bases in the Arctic. Russia is moving eighty soldiers and their families to one of their islands up there to live this year. Canada’s plan is to make eighteen small army bases. China has invested in icebreakers – strange when there’s no ice around China. In the final scene of the video, a black US submarine emerges and breaks through the ice, literally and figuratively disrupting the serenity of the natural white landscape.

Elaine Byrne (b. 1970, Dublin, Ireland) is currently living and working in Brooklyn, NY. She uses a research-based methodology to explore a wide range of topics.  Both the form and the content of her work evolves as the research proceeds. Her art examines overlooked histories and historical texts as a platform to present their relation to current political and social concerns. 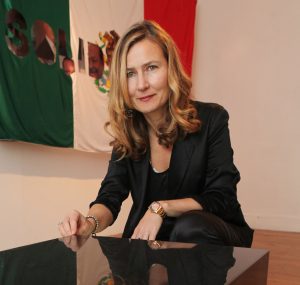