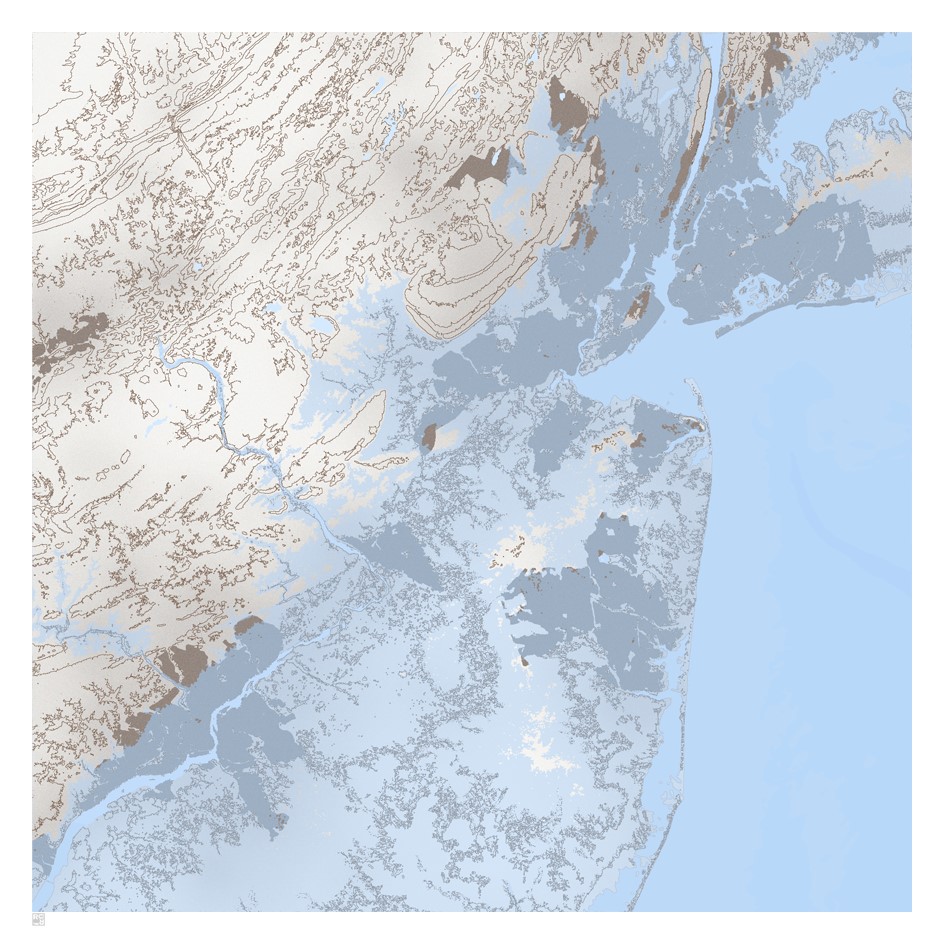 Future Cartography III (2013), presented in our exhibition, shows a hypothetical future scenario of natural change caused by man. The works are geographical maps that Rúrí meticulously designed, depicting how the shorelines of our planet will look in the future, based on calculations of the mass of water that will be released with the predicted decline and total melting of the East Antarctic ice sheet. They are omens—a premonition of what will be in the near future. However, this is not just a premonition, but a real prediction based on scientific and mathematical calculations. The charts are based on satellite data; the calculations are based on information from METI and Marine Geoscience Data System, from the ASD GDEM dataset, which is a product of the National Aviation and Space Administration (NASA), as well as from open sources.
Often when we listen to the news on television, or read on the Internet or in newspapers, we do so absentmindedly. When the topic is the Arctic, we do not pay much attention; it seems so far away. By underestimating the criticality of its situation, we are consigning our planet to a negative destiny already predicted. Rúrí’s artwork confronts us directly with the future we are going to meet. With her art and the help of scientific research, she presents the situation to us clearly and graphically.

Her work can be thought of as Geopoetics (natural geographic exploration with a poetic interpretation) using new scientific mapping techniques that foresee the future mapping of terrestrial areas. The regions selected for Future Cartography III are North America and Iceland—two continental masses in the Atlantic Ocean. More pointedly, for those of us living in New York City, the maps in our exhibition are part of a larger map of the Eastern Seaboard of the US and show us what will be left of New York and New Jersey. When we look closely. we see that our city has almost disappeared.
For Rúrí, art is not about passive contemplation, it is a communicative and educational channel. The artist has a fundamentally important role in society—to reveal, tell, show, and shake the sleepy consciences of human beings.

By Marilena Simeoni, University of G. D’Annunzio of Chieti-Pescara.

Rúrí (Rúrí Fannberg, b. 1951, Reykjavik, Iceland) is an artist from the “edge of the world.” That is how ancient people referred to Iceland. People living in the far north have a different concept of nature than those of us living in cities in the south. There, where the sky seems closer and the weather can be extremely hostile, man is not dominant over nature; nature is in command and man must work to find an equilibrium. This symbiosis with nature is evident in Rúrí’s work. As she says, “Coming from Iceland I have a very close relationship with the land and the forces of nature: the land is not very cultivated, and the geological observation is easier to carry out. One can observe how the landscape was shaped by the first events, floods, eruptions and earthquakes; how the ocean has strongly pulled the coast, how the rivers have brought sediments accumulated on the banks and the shore.”
Although she comes from “the edge of the world,” Rúrí has always been committed to working on problems affecting the entire planet—trying to find a solution for them or trying to inform people about them through her art. There is a paradox in her works: she goes from the micro to the macro, transposing the isolated and local situation into the vastness of the globe; it is like a butterfly effect. Because of this mixture of philosophical and pragmatic elements, her art takes diverse shapes, such as performance, drawing, sculpture, photography, video.
Rúrí was selected to represent Iceland in the 50th Venice Biennale in 2003. The work she installed in the Icelandic Pavilion, Archive-Endangered Waters, was an interactive, multimedia installation consisting of 52 photographs of waterfalls that have been damaged, or have already disappeared, due to the construction of dams. The images were developed on transparent film, mounted between two glass plates, and installed inside an enormous steel frame structure, forming an archive. All photographs are precisely and scientifically labeled, and when a photograph is extracted by the viewer, the sound of that specific waterfall can be heard. As the visitors walk through the pavilion, their movements directly affect the photographs in the steel frame. As in many of her works, Rúrí highlights in this piece the beauty of the natural environment and the human presence within it. She also underlines the relationship that exists between nature and human beings. But she goes further; in fact; she also involves the audience in a physical relationship with her art, asking them to reflect on how their actions and their movements influence the natural world.
A theme very dear to Rúrí is that of nature and how human action is connected to it. Water is like a muse, in which Rúrí finds inspiration for her creations. 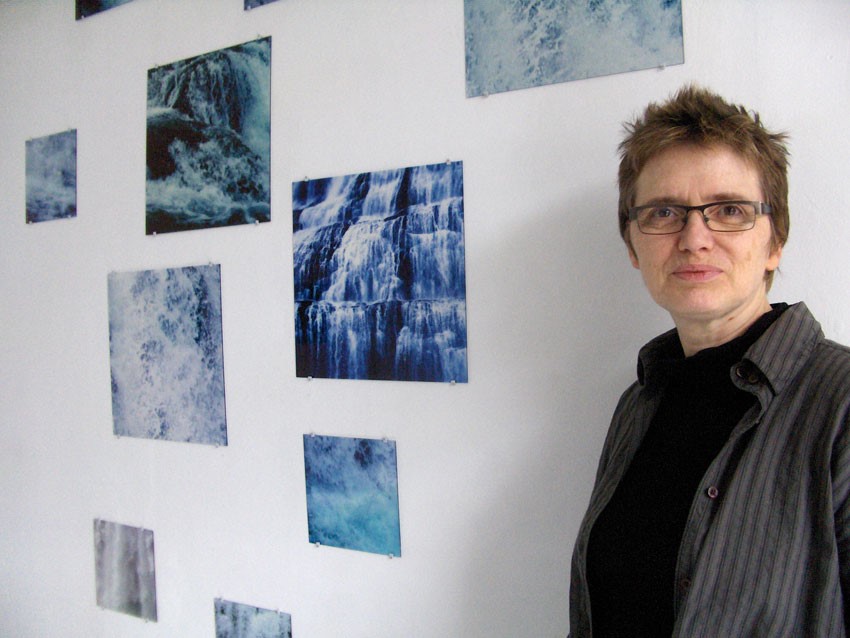